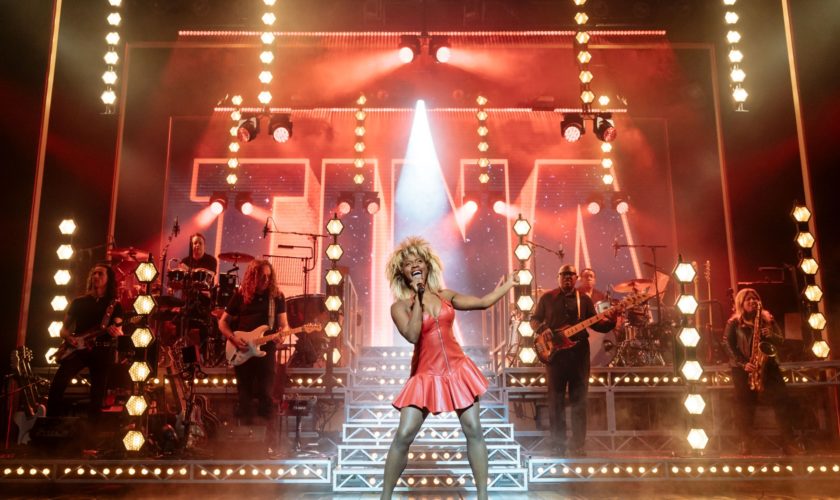 Tina Turner’s eyes watch the audience shuffling to their seats from the Roy Lichtenstein-esque show cloth. Mirror balls are hanging from the Royal Circle, poised. It’s a Thursday matinee performance, and the Aldwych Theatre is packed.

I would usually be flicking through the programme in the 15 minutes before the curtain goes up, but Tina’s programme costs £12 (incidentally that’s £2 more than her 320-page autobiography – also for sale in the foyer). So instead I’m scanning the lighting grid for clues; six towers of blinders suspended above the proscenium arch, topped with a full-width LED screen suggest a concert is on the way.

Tina Turner’s story is bitter and gritty. The show opens in Nutbush – a small rural town in western Tennessee. Tina Turner – then known as Anna Mae Bullock – is a child, disliked by her mother who leaves her with her abusive father.

The musical tracks Tina Turner’s true story – raised by her grandmother before joining her (reluctant) mother and sister in St Louis. Turner is discovered by Ike Turner, who names her, marries her (forcefully), and abuses her for almost two decades.

Her story told through her own music, Tina is played today by Hannah Jay-Allan (Swing & Dance Captain), who hits the high notes and conveys the lowest of Tina’s low moments with equal conviction.

Ashley Zhangazha’s Ike Turner is unlikable and an insecure bully. Yet his contribution to Tina’s meteoric success cannot be overlooked.

However, save for her stage name and early music, the show highlights the important contributions of her subsequent two managers – Rhonda Graam (Francesca Jackson) and Roger Davies (Oscar Batterham).

Without her Australian novice, Roger Davies, Tina Turner would have been discarded in the dustbin of woulda-coulda music history. In debt to Ike, and trapped in Vegas: Private Dancer crossed with cleaning lady.

Without her fateful three-week trip to London, to record with a band cobbled together by Davies who had wanted Tina to record What’s Love Got To Do With It, Tina might never have hit the levels of superstardom for which she’s now known.

She would also have never met her now-husband Erwin Bach (Edward Bourne), who – though sixteen years her junior – has been Tina’s partner since the late 1980s.

Mark Thompson’s staging of Tina Turner’s life story makes clever use of the space. The exposed wood floor, with doors and walls that raise from the ground, and the full-wall screen upstage managed to turn the stage from small-town church to stadium and everything in-between.

Credit also goes to Anthony Van Laast and the dancers who perform his challenging and fast-faced choreography.

I just wish all members of the audience gave the cast, other audience members and indeed Tina herself, the respect that we all deserve. From my seat in row D, I can see at least phone screens through the performance.

As you enter the Aldwych auditorium, there are amusing signs that ask audience members not to sing or dance during the show. It’s a shame they clearly need to add no Facebook scrolling or WhatsApp messaging too.

If you love the music of the Queen of Rock ‘n’ Roll, then get yourself a seat at the Aldwych Theatre for this raw show, that leaves you feeling unbeatable by the end.

As an amusing aside, the production’s official website would like you to know that “Tina Turner will not be performing in this production” – I wonder how many people had to ask before that made it (in bold) to the booking page?!

This production of Tina – The Musical opened at the Aldwych Theatre on 17 April 2018.