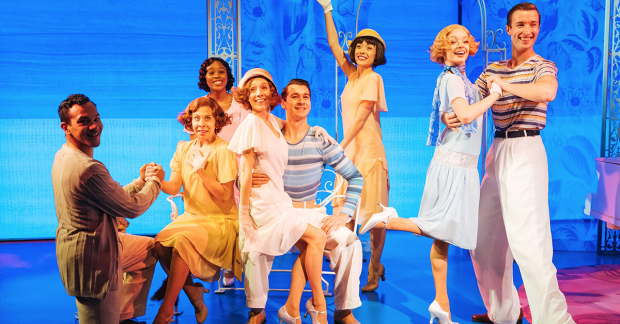 The Menier Chocolate Factory, by London Bridge, is one of London’s most unique theatres – a studio crafted from an old chocolate factory. The current production of The Boy Friend takes you back to a time when this place was still making chocolate.

It’s the first time Sandy Wilson‘s musical comedy has made an appearance on the London stage in over 10 years, and it continues to shine a warm, nostalgic glow on the 1920s – now, remarkably, 100 years ago!

Set in the South of France at a Finishing School for fine and proper young ladies, the musical lightly flits between characters and their secret love interests.

The show has an old-fashioned charm to it, with characters launching into song, followed formulaicly by a dance break, then a false ending to allow for a round of applause, and then into a reprise.

The cast works well as an ensemble and Matthew White’s direction makes good use of the limited space in the studio.

Talking of the space, one man from the far bank of seats needed to leave midway through the first act and was forced to walk across the stage to get to the exit. None of the cast were phased at all, but I found it a little distracting for that moment…

The set design is fantastic for such a limited space, and each of the three scenes involves some quite substantial set changes – requiring the audience to vacate the studio in the first interval.

Neat white metal gates and railings shape the stage, which plays out to two banks of seating. The orchestra is masterfully worked into the space, in something of a beachside promenade bandstand in the corner.

Sandy Wilson‘s orginal score is very catchy and stays dancing around your head as you leave the theatre, especially the title track, which makes a few appearances through the show.

One of the extra touches that you can choose to enjoy at the Menier Chocolate Factory is a themed menu in their restaurant, before or after the show. On this occasion I would recommend it, as the menu wasn’t hugely exciting and the service was a little all over the place… but it’s good to know for the future!

This production of The Boy Friend opened at the Menier Chocolate Factory on 22 November 2019 and closed on 7 March 2020.