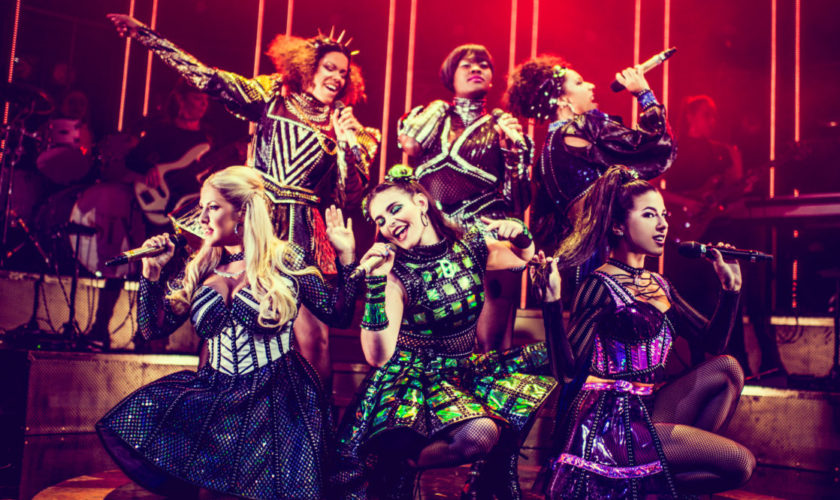 Toby Marlow and Lucy Moss‘ retelling of the old Divorced-Beheaded-Died-Devorced-Beheaded-Survived trope, shows the power of musical theatre in reframing a story we think we all know.

SIX is a 75-minute girl power concert that lets Henry VIII’s six wives tell their own stories for the first time.

The musical was originally written by Marolow and Moss for the Cambridge University Musical Theatre Society to take to the Edinburgh Fringe Festival in 2017.

It’s fair to say that it was seen by the right people, and it has absolutely taken off since then and is enjoying a sell-out run, a UK Tour as well as international runs in the States and Australia.

The music is distinctively poppy and I can see certain songs (such as Anne Boleyn’s Sorry, Not Sorry) becoming very successful outside of the show as well.

The six Queens were all extremely dynamic and the tempo continued to punch at full throttle for the whole “concert”.

Millie O’Connell (Anne Boleyn) caught my attention in particular; Boleyn is given some of the best moments in the show – probably warranted as she’s probably the most individually well-known of Henry’s wives.

Though, as Catherine Parr (Maiya Quansah-Breed) points out, whilst the premise of the show does without the King himself, no one would know who these six ladies were if it weren’t for him.

Disappointingly, the Programme (which costs in the region of £1 a page…), is not up to date so the actress who performed the role of Anna of Cleves does not get a mention.

The show is turning out to be one of the Arts Theatre’s most successful productions and they keep extending the current run.

The theatre matches the show really well; Emma Bailey’s pop-rock concert staging fits the space and gives the Queens enough space to strut their stuff, whilst keeping the energy from leaking away.

And credit is most certainly due to Carrie-Anne Ingrouille for her hip and snappy choreography – she gives the Queens their own personal sass and style, whilst nailing the ensemble pieces, effectively emulating the huge arena concerts of the Spice Girls.

The result is a punchy pop concert that is both educational and entertaining in equal measures.

This production of SIX opened at the Norwich Playhouse on 11th July 2018. SIX is currently playing at the Arts Theatre until 5th July 2020.

Running Time: 75 minutes, without an interval.